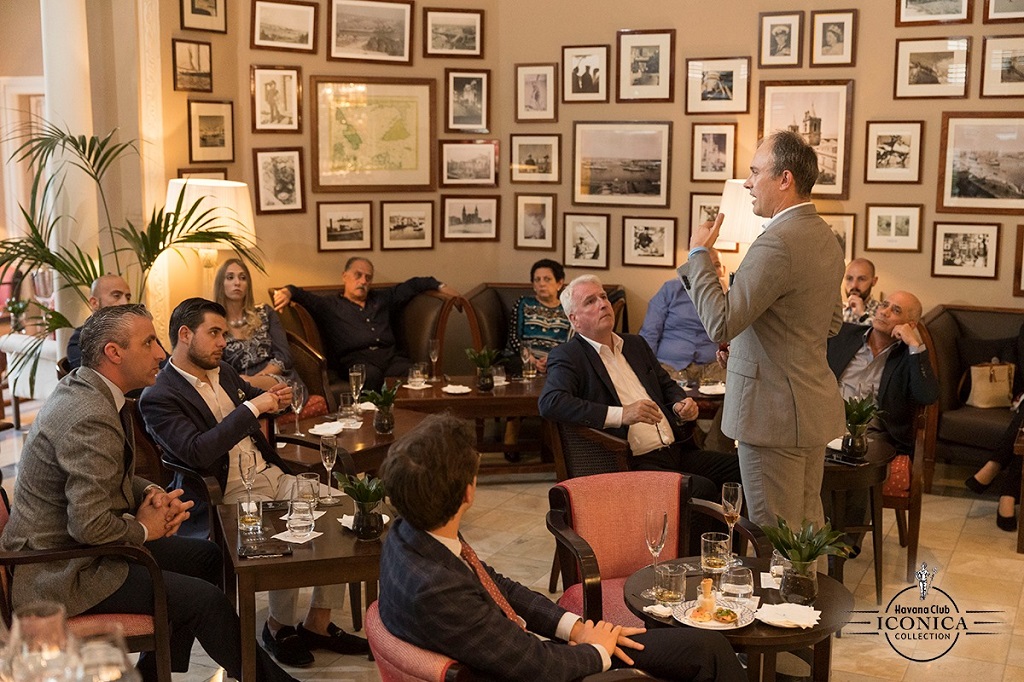 Havana Club held a tasting at The Club Bar to explore the rum and food flavours created especially for this private event. Emmanuel DuPont-Machet, Havana Club Export Area Manager, introduced his thrilling Havana Club ‘Iconica Collection’ tasting with a welcome in Maltese and ran a Workshop on the sensations of Cuba that incorporated a taste of Malta created by The Phoenicia’s Executive Chef Daniel Debattista.

Cuba says the evocative Monsieur DuPont-Machet, is 3 key words; passion, time and craft. 61 countries make rum around the world, every country has its own culture, is catering to something in world consumption, and importantly has their own philosophy of life. Cuba has its own unique way. Essentially there are 4 styles of rum. Fruity Caribbean influenced by the French. Spanish style, light rum, sweeter. British traditional pot still rum, sweet, oaky, strong, heady. And Cuba, in a class of its own as demonstrated through the ‘Iconica Collection’ tasting which ran a range of flavours and styles.

Original sugarcane distillate after fermentation goes into casks for 2 years and is then filtered through charcoal. Batches then move forward across many years of bottling, with the base rum always being a portion of the aged rum not bottled in any given year. Following this the colour and congeners are removed giving life to the rum base.

Mixed with fresh rum bases, Havana Club never bottle the whole batch. The next batch goes to the next level, for example from 3 year old to 7 year old. Mix and age. The 7 is not fully bottled and that remainder goes to the next level. What is important is the evolving of the rum bases. Havana 7 is the base for aged rums in the Iconica Collection.

Havana Club Anejos 15 Anos, you drink it, then turn the glass upside and wait for an hour. Emmanuel forgot to check after an hour, checked it after more than 2 hours, and it was still as fresh in the glass as the first pour, sheer proof of its ageing. Havana Club 15 has an evaporation rate in ageing of 10%, the Cuban concept being continuous ageing, or what is referred to in Cuba as ‘total ageing’.

Emmanuel explains that they want the highest notes in Havana Club 15. He says tasting is like falling in love, first the visual, the colour, then the aroma, then the kiss of the glass to have the sensations of texture, sweet, acid, salty, bitter and umami, great sensations.

The best way to experience what a spirit is is to pair it with food and to challenge it. The first rum was a Havana Club 15 anos gran reserve paired to sumptuous Arancini: the star was a rabbit and prune with tarragon mustard. Rabbit and prune, aroma strengthener, saturate the palate with new flavours and sensations. The elegant, sophisticated rum, full of finesse, goes well with the light, crispy Arancini delicately filled.The evolution from citrus in the rum to prune in the dish, the texture is the sensation of the food and spirit on the palate. A Mushroom and coffee Arancina created a surprise with contrasting flavours, heavier, still a good experience. While a Chicken ‘Mole’ rounded out the pairings, with a stronger profile.

Cuba in a bottle is Havana Club Seleccion de Maestros, the most democratic rum in the world. Triple-aged. The first ageing is 2 years before filtration, then continuous ageing, and the fills evolve, the Seleccion de Maestros gathers a team from all the Maestros Roneros together, to taste the rum together. If any Maestro says “no” then the expression does not get to the third stage. Once approved, the third ageing is aged in the oldest cask from Havana Club. Sherry casks from Spain go to Scotland, and after 60 or 70 years these casks are prepared for Cuban rum. Spiciness, intensity, strength, power, versatility. The pairing is all about texture across 3 kinds of salmon; mousse, hot and smoked. The rum can balance the fat and the flavour of the salmon. The pairing with hot smoked salmon, mussel, with sauce verte is an unctuous combination of hot, sweet and spicy, balancing all the flavours. Smoked salmon, with celeriac remoulade, slides and glides with the rum. The smoked salmon mousse, with keta caviar and chive brings out tobacco notes in the rum. A great brand is able to scope all the sensations, and with the personality to handle food and other flavours such as cigars.

Since 2016 the Havana Club Tributo has celebrated individual styles. In 2016 Caribbean; fruity, sweet, good with game. 2017 French, dry, more serious, vanilla and a sensation for smokers. Havana Club Tributo 2018 cask tribute using origin of the cask from Scotland. Evolved base rum matured in whisky casks. Influences of Laphroig, light but with a touch of saltiness with spice. Elegant sweet honey against lingering peaty whisky notes. Pairing with a dazzling carpaccio of lamb with green olives, golden raisins, fennel, white balsamic vinegar and the smoky salty rum helps it to melt in the mouth. Vinegar, green olives and fennel balances with the saltiness in the rum. The dried fruit in the rum matches beautifully with the raisins in the lamb dish. Delicious.

Havana Club Union, known as ‘Cohiba’. This is the first time a Cuban rum was made exclusively to go with Cohiba. It’s ‘Union’ between Havana Club17 and Havana Club Maestros. A deft pairing by The Phoenicia’s award-winning brigade of chefs conjures up caramelised pineapple with Muscovado sugar, Havana Club Rum, coconut ice cream which explores a rich range of intense flavours to be discovered locked within the Havana Club Union Cohiba. Balance between citrus, coconut and intensity, a fine way to round off a Cuban rum evening in style.

Emmanuel has kept The Club Bar in rapt contentment for a couple of hours with lovely rum and food pairings, appreciative murmurs from all the friendly crowd testify to the hard work put into this event by everyone behind the scenes. Chefs and Havana Club have managed to perfectly match flavours they find in local fresh foods with the ‘Iconica Collection’ with which they have been magically paired.