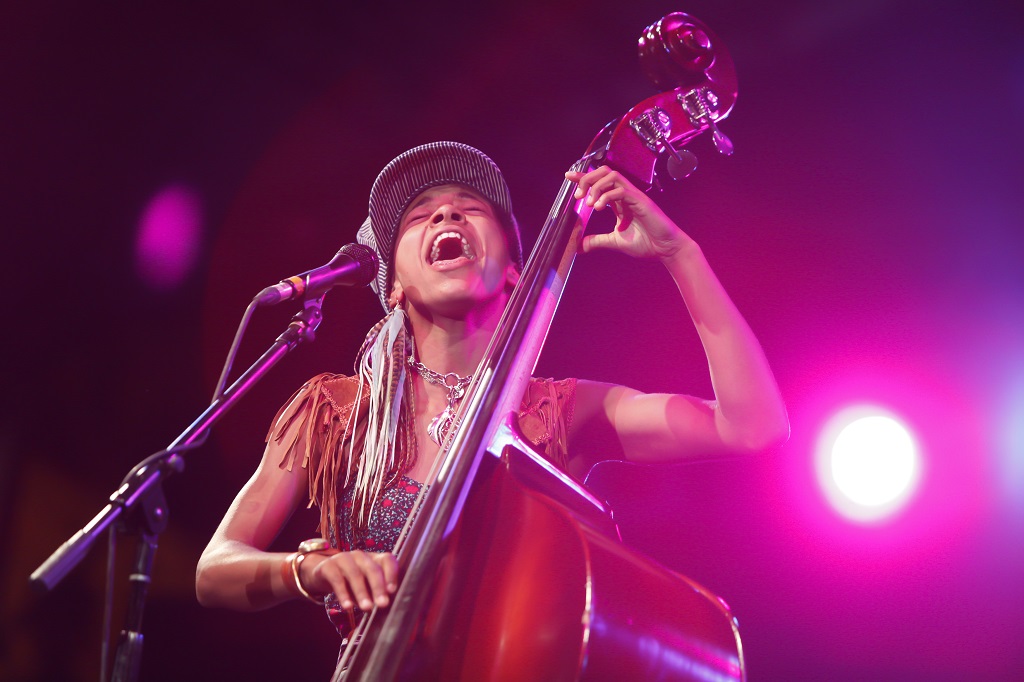 Darrin Zammit Lupi’s ‘Moments in Jazz’ is set to adorn the walls of The Phoenicia’s peaceful Palm Court Lounge with 20 moments that express the 29-year arc of Zammit Lupi’s dedicated coverage of the Malta Jazz Festival.

Darrin Zammit Lupi’s ‘Moments in Jazz’ exhibition will be held from July 15 to July 20, following similar annual jazz visual arts exhibitions in the Art Deco hotel by Joe P. Smith, Charles ‘City’ Gatt, painter Jenny Caruana and many others. Darrin has been covering the Malta Jazz Festival since its inception in 1990. He is one of four photographers whose work is extensively featured in the book ‘Portraits in Jazz’ which was published to celebrate 20 years of the festival in 2010.

Arriving after a late night rehearsal, Darrin was thinking about how to hang the ‘Moments in Jazz’ exhibition when we caught up for a chat. The walls of Palm Court Lounge momentarily a nemesis as we discuss what drives an artist to cover the same event every year for 29 years, an obsession that has yielded much artistic fruit including this solo photography show.

‘Moments in Jazz’ traces the journey of one of Malta’s top cultural offerings through 20 dramatic photos of the performers selected from thousands that all deserve to be featured in an exhibition. This culling to 20 represents the performers for whom Zammit Lupi has an affinity, with some of the performers holding a mystical place in his Cannon, as they perform an artistic duet that sees both performer and photographer caught spellbound in time with the music, the moment and the mind.

Darrin has been a contract photographer with global news agency Reuters since 1997. His work has been widely published in the international press, including TIME, The New York Times, The Sunday Times, The Guardian, Paris Match, and others. He brings this sensibility of reportage to the international jazz scene, his jazz photographs having been published across the globe’s jazz journals and portals, although this is not the criteria which he has used to select prints for the ‘Moments in Jazz’ solo exhibition, the first time that he has exhibited a jazz lexicon on his own.

‘Moments in Jazz’ is a special collection of Zammit Lupi’s finest jazz portrait work, all assembled in the beautiful space at the centre of The Phoenicia, Palm Court Lounge, which does much to act as the right backdrop for a carefully curated collection that speaks to the photographer’s passion for jazz and jazz performers that transcends the boundaries normally attested to by fans of the genre.

Better-known as a multi-award winning photo-journalist, this exhibition gives insights into the man and mind behind the lens, a humanitarian whose migrant body of work has been seen in the national arts centre in Malta; at the Photoville festival in New York City, USA; at Duke University in Durham, North Carolina, USA; at the University of Foreign Studies in Tokyo, Japan; at the Council of Europe in Strasbourg, France; at the Visa Pour l’Image Festival of Photojournalism in Perpignan, France; and many more.

A purist who gained his Masters in Photo-Journalism and Documentary Photography from the London University of the Arts, “always seeks to get it right first-time in the camera” and “almost no Photoshop, you can’t add elements that weren’t there or remove those that are there. As a photo-journalist it’s been indoctrinated into me that what you see in a picture is a true representation of what you have in front of you. I’m documenting what is real.”

“I love jazz as music, which is why I started covering the jazz festival. I also enjoy concert photography. Betty Carter’s management put some restrictions in 1994, Betty wagged her finger at me with a smile when I shot her from the wings and I still remember that. When I shoot John Patitucci, the way it felt to me was like a duet. The way I was shooting, the amount I was shooting, he has great facial expressions as he plays, it felt like there was a direct line of communication between us, an intimate 2-way thing even though he was playing for the whole audience.”

“I concentrate more on facial expressions nowadays, but have used so many techniques to explore the performers and the festival over the years. Taking pictures and moving the camera around to get a sense of movement, without getting into the abstract.”

“The first thing that catches my eye is the light, shadows, the overall composition, and then I see how to execute from there. The aesthetic is a personal one and light is at the heart of it. When something looks good it looks good. Period. Sometimes it’s columns of light. Shadows. Then I wait until someone walks into that. You see the scene and then wait for ‘the moment’. That’s what I shoot.”

We end by asking Darrin who his favourite jazz photographer is. Instantly and without hesitation, he says “Joe Smith”. From the universe and history of photographers that have covered jazz, and the pantheon of single-minded photoartists who have taken jazz photography to new heights, it’s “Joe Smith”. Professional respect overtaken by admiration for an outstanding body of work. Darrin deserves to walk in those beloved footsteps based on the evidence provided by ‘Moments in Jazz’.