The Phoenicia meets La Voix: “My memories of Malta will be this hotel” 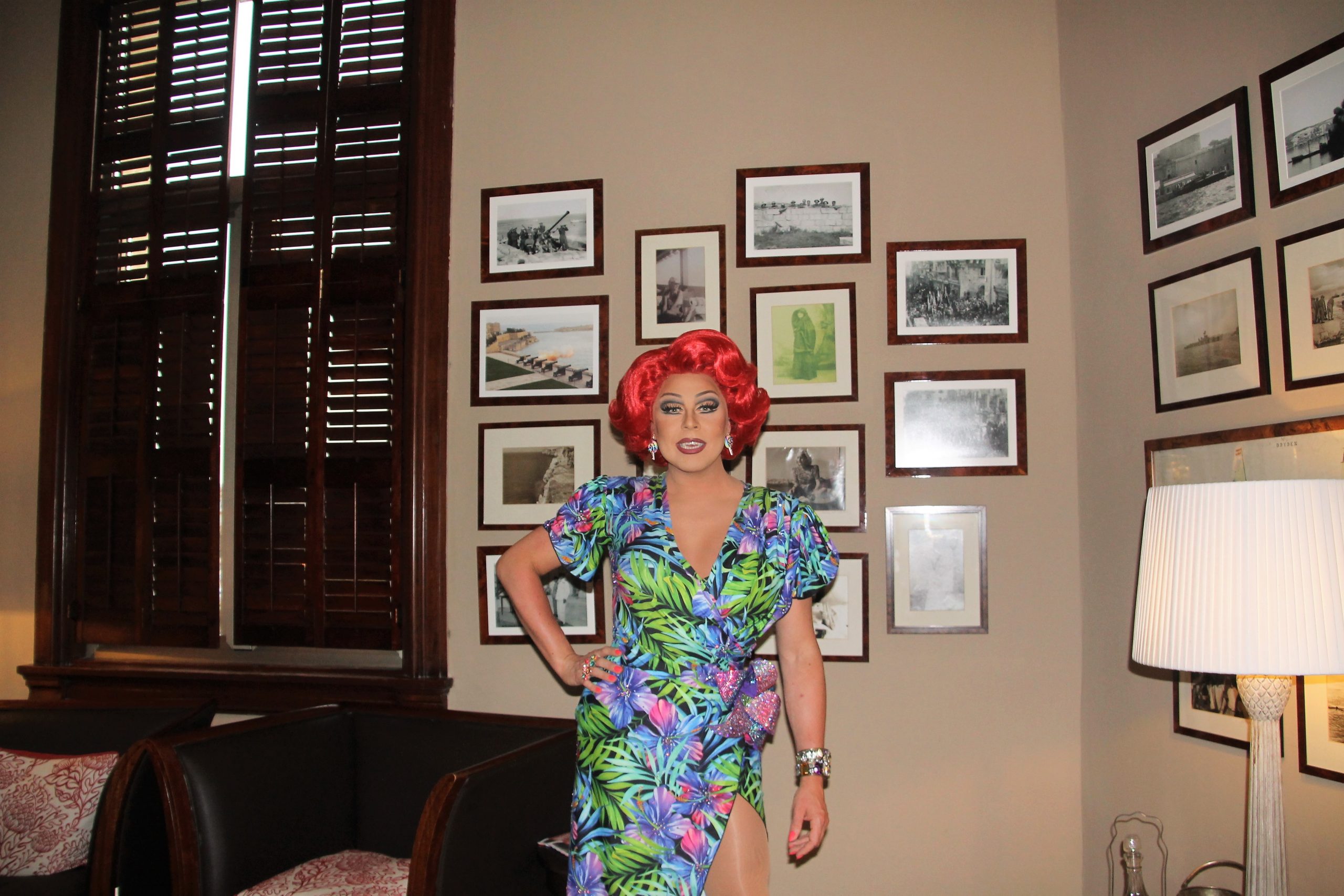 Performer ‘La Voix’ shares star power and one-liners with The Phoenicia Malta. Over a vodka tonic with a slice of lemon we caught up with La Voix in the iconic Club Bar for a rollicking chat about fame, French names and the future. In her own inimitable words.

La Voix, you’re looking gorgeous, tell us a bit about yourself.

“I’m from the Northeast of England, near Newcastle, lived in London for 20 years, and now live in Hertfordshire. When not on cruises or on airplanes.

I am inspired by that era of Judy Garland, Shirley Bassey, Liza Minelli, big belting women, big brass bands, have always inspired me. I grew up with my father listening to Cher albums, Donna Summers, Liza Minelli, what you listen to as a child is what you remember most. As a child of the 80’s, I remember he used to listen to a lot of Julio Iglesias, and a lot of Barbara Streisand, a very eclectic mix. I had no understanding of celebrity or fame, of course it’s not what it’s like now, it was all on VHS, I remember thinking oh my gosh who’s this person, how does this one person command that much attention from the crowd, and how everyone wants to see her. I remember really vividly watching it, that was my first taste of fame. Since then it’s always been my goal to hold an audience for as long as I can.

If I go on stage and I’m not quite getting them, the audience, I will not leave that stage until I’ve got them hook, line and sinker! To my detriment, or theirs! Sometimes, what’s meant to be 20 minutes can end up being an hour. So it’s the performance style from that era which has influenced me. An era of women who took risks and won opportunities. They radiate energy and hit the right notes. When you give the audience that level of energy and an attitude of ‘come-on let’s do this’, the audience respond with ‘this is great!’.

You’ll never chat during my show! I don’t pick on audience members who misbehave, tongue-in-cheek, I empower them. Fashion. Hair. Local area. A place that needs a bit of TLC. I let them know if it’s a dump! In a nice way.

What inspires you in the performers you portray?

I travel around a bit, so when doing Pride shows, it’s 80’s, Bonnie Tyler, Donna Summers, big medleys of Gloria Gaynor, songs the community loves to hear, mixed in with show tunes, dream girls, copacabana, keeping the energy up!

To watch me perform them you might think I am parodying the stars, when I do them on tour in theatre it’s set-up with a bit of comedy in it, especially someone as easy as Cher, but it comes from a genuine passion for these women, it comes from a place in me where there’s real respect. The songs are important to me. ‘This is my life’ by Shirley Bassey, you might start it very comedic with her hands and facial expressions, the audience feels it because the song has such heart, by the end the audience is right behind me. I like to try and give a serious tone to it alongside the comedy. Every time I do a song I find a new nuance. Even in rehearsal.

4 years ago my show was 100% improvised. Now, it’s not scripted, but I’ve honed in on my best material from improvising my lines, knowing this line works and that line works, that’s my section on men, this is my section on travel, so I have a theme and try to stick to it. I never do! It’s a learning curve for me. No two audiences are the same. I prepare by knowing my stuff, learning lyrics and listening to the music, relaxing and taking it in. That’s a 15-year cycle as larger than life! I don’t come from a showbiz family, none of my parents could sing, I knew I wanted to get into it so I had to genuinely learn. I don’t classify myself as the best singer, I haven’t trained on a musical theatre course at the Royal Academy, I’ve just done bits of training here and there of various modules, but never a full course. You feel a little bit sometimes like you’re faking it. The more you’re doing it, and doing it, and doing it, I’ve learned singing from singing on-stage in front of an audience with a mic in my hand. When I go to a coach and say when I sing this song “this happens”, and they go ‘you need to do this, or you need to do that’,; it’s a bit like driving a car, crashing it a few times, and ringing an instructor and saying I might need a few lessons as I can’t seem to get round these roundabouts.
That’s how I have always approached everything. The opportunities always come to me before I’m quite ready! It’s only now I’ve

got to the stage where I can call myself a singer. ‘La Voix’ was a brave move. If you don’t class yourself as number 1, nobody else is going to do it. I called myself ‘La Voix’, so I have to live up to it.

La Voix who designs all your wonderful outfits and stage looks?

I do all my own make-up, hair, the ‘look’ of La Voix, that’s all me, the aesthetic. I have brilliant people who do the dresses designed by James Maciver, and so on. I do a lot of changes during shows, up to 11 times in a show, a 60-second change, amazing transformations. And a brilliant lady ‘Crystalled by Jane’ who puts 6000 Swarovski in each of my shoes.

Do you write your own comedy material?

I work with a writer who gives me scenarios and stories, David McGillivray, but I do all the comedy around it. David’s very factual, and my head’s all over the place! He wrote for 35 years for Julian Clary and the Paul O’Grady Show, he’s a veteran writer and quite unique.

La Voix, as a glamorous global traveller, what has the world taught you?

We’re playing Orpheum Theatre in Malta, of course I’m used to arriving and playing in places I’ve never been to before; I was flown out to Hawaii to do a theatre show, I’ve been all over America, out to Tahiti, and Australia; audiences from around the world are very similar, up for a good time and want good old-fashioned entertainment. I’ve played nearly every Continent, except Antarctica, Canada and Iceland. 36 cruises in 6 years.

As a comedian on cruises, your knowledge, knowledge of jokes and cultures, everything just broadens. You’re not stuck in jokes just about the North of England. You are made worldly wise.

I travel a lot, stay in a lot of hotels, and in a lot of places. I believe if the hotel is right, the room is right, and the food and service are right, your experience of that country is affected by how good the hotel is. I stayed in a wonderful penthouse at The Bellagio in Vegas once, so when anyone mentions Vegas I get all glassy-eyed, I go “That was amazing”. I went to Nice and stayed in a terrible hotel, when anyone would mention Nice I would say “it’s horrible”. A friend of mine owns a lovely health resort in Nice and put me in a fabulous penthouse apartment, Nice in my eyes is now incredible! So I think it’s really important, if you have the opportunity to stay in places like The Phoenicia, my memories of Malta will be the hotel not the show, it was amazing. This is nice, thank you so much. It’s a beautiful hotel! It’s been lovely to explore, the pool down there in the garden is just incredible.
Beautiful view. The history, the walls.

It’s very exciting for us to know that the Queen had been here as well. We found a picture of her sat on one of the hotel’s terraces, so we’ve re-created it! We found the exact spot. It’s such a beautiful building. This isn’t a regular hotel, we noticed when you were having your cocktail party last night that the cars arriving all had little flags on the front, and lots of chauffeur’s.”